I have a bit of a thing for Pinterest. It's kind of addictive. I currently have boards full of ideas for things to make in the future.

One of them was especially inspiring though: this embroidery. Love it! I kept going back to look at it so thought I would have a go at creating one of my own.

At the same time I was throwing around ideas for a new Kindle cover, and thought I would combine the cover with the embroidery.

I've seen a lot of Kindle covers online and most of them were much fancier than I wanted. A lot of them open like a book, or have an inbuilt stand so you don't actually have to hold your Kindle. I didn't want any of that, part of the beauty of the Kindle for me is its simplicity. All I wanted was a simple slip cover to keep it free from dust, scratches and toddler fingerprints.

I embroidered the cover design using three strands of DMC cotton. The entire design is French knots. Hundreds of them! It actually came together reasonably quickly though, and it was pretty relaxing to stitch away in front of the tv at night.

I'm pleased with the final product but if I did it again (and I won't!) I would make the font thicker. I would also outline the edge of each letter in a split stitch or back stitch to make it look crisper. 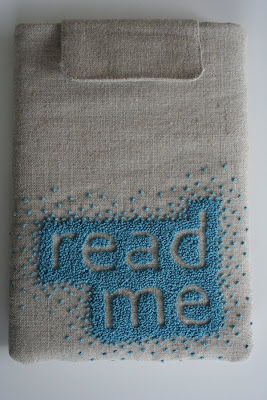 The finished product. I stitched on to the most beautiful linen from Kelani Fabric. The cover is a simple slip cover lined in a blue and white polka dot. It closes with a velcro tab (was initially a magnetic button but that was too clunky, so I had to get out the seam ripper). 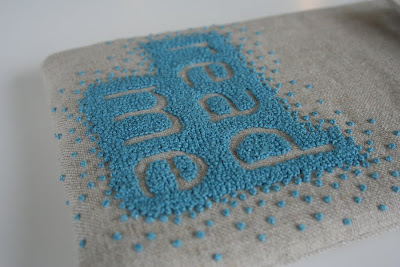 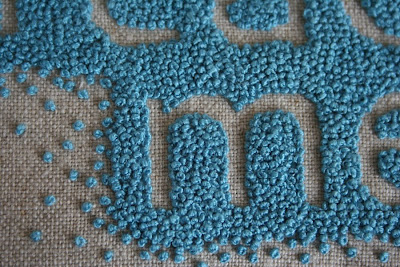 French knots - this is only my second embroidery so I had to re-learn how to do these. I really recommend the tutorial on Sublime Stitching. 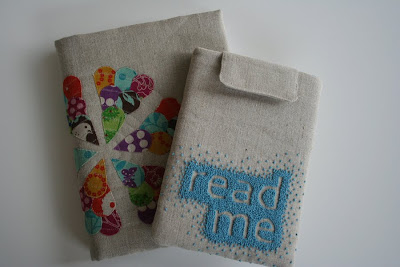 Same linen as I made my journal cover in. Love the look of them together (yes, I'm a dork).
Posted by Claireabell at 9:10 AM