I mentioned in my last post that I've finally got brave enough to attempt sewing at knit. As part of this process I discovered that sewing with knit is actually fine, but there are some elements of it that make me want to beat my head against the wall. Like attaching rib binding... that's enough to cause a nice big bruise on my forehead.

I am about 7 weeks away from meeting my new baby, and thought I would get some practice making a little onesie. I chose a pattern from Ottobre 3/2011 (I think it's called Peppermint) to make for my colleague's new baby girl - I made a larger size to fit her in the Summer.

The actual pattern is very simple. The body of the onesie is all one piece, so the only tricky bit was to attach the binding. According to Otto, the binding should be cut to about 70% of the edge length and then stretched on. But when I tested this on a scrap of the fabric it was a hot mess.

After getting some great advice from a few good sewing friends (hello girls, you know who you are!) I felt confident enough to attack the binding. I cut a huge strip of binding and stretched as I sewed - a little less on the straight bits and much more around the legs and arms. I also found using my walking foot was a big help.

When I was finished I was pretty pleased with the results. But when I went to fold the binding over and attach it to the other side, it seemed to stretch again... and I don't know why! I unpicked a few times and tried everything, but still couldn't get the result I was after.

After a few hours I decided enough was enough, and just finished the damn thing, imperfections and all. It looks okay laying flat on the table, but I suspect the neckline is too big, and maybe the legs. I also made the binding too thin, so that the snaps kind of overlap it. And the icing on the cake is that the paint flaked off some of the snaps as I was hammering them in. So I don't think this little onesie will meet it's intended recipient, I am too embarrassed and will make something else instead. If I end up having a girl I will see what it's like on her and she *may* wear it.

I am not completely turned off sewing this type of thing. It's certainly a learning experience and though I have a lot left to learn, I felt I picked up a few new skills. I'm going to attempt a few envelope tees next, as I hope they'll be a bit easier and more forgiving than a onesie like this.

I have also rediscovered Ottobre magazine during this process and am totally inspired. I have been busy tracing out lots of (mainly woven) patterns so I can get a head start on my kids' Summer sewing before this baby comes along. 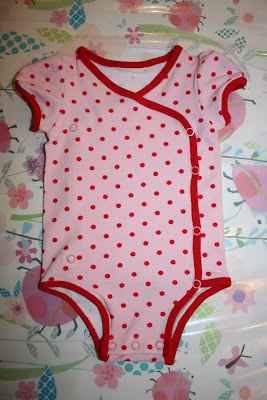 The finished onesie. See how narrow the binding is? I wish I had made it wider so that the snaps fit better. 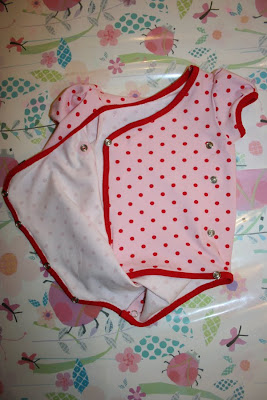 The wrap-around style is really cute, but made it hard to gauge how much to stretch the binding, especially around the legs (as it wasn't simply a matter of using the same length binding for the legs). 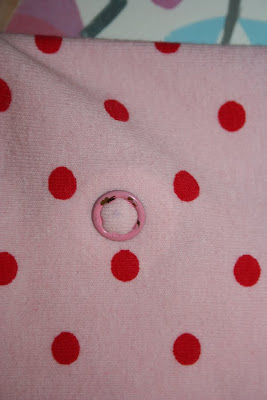 Hammered in the snaps and the paint flaked off to reveal a rusty snap! GAH!
Posted by Claireabell at 9:35 PM