A gift for a new baby

Little Arabella was the first girl after a string of boys, in fact until she was born all of the 'second' babies have been boys.

We usually give the new babies a cot linen set or sleeping bag made by one of the very talented mums in our group. But as she is heavily pregnant with her own 'baby #2', I put my hand up to make Arabella's gift.

I decided on a little dress - the O+S birthday party dress. Yes, I have made it before (three times, in fact) but I think it is just so beautiful and a bit special. I'm also so familiar with the construction now that it is very fast to make up, I didn't need to refer to the directions. I also made a pair of matching bloomers using Lotta Jansdotter's pattern, and some matching button snap clips. The dress and bloomers are both in size 6-12 months.

As I mentioned above, this is the fourth time I've made this dress so I decided to do a few things differently to relieve the boredom.

First of all, I used French seams rather than overlocking. I only learnt how to make French seams on my last project, so these and still a bit of a novelty to me and I love them! Seriously, they look so neat and I really like that I'm able to finish the seams as I sew. The pattern is pretty well suited to this method of finishing, although I did have to improvise a little when attaching the top facing, which calls for the seams to be opened out.

The second thing I did differently was to use a different/coordinating fabric for the facings. I really love this look and to be honest it never would have occurred to me to do it when I first started sewing last year. The fabric is from Lila Tueller's Soiree range. I used Meadow Paisley in Aqua for the dress and Leaf Confetti in Sun for the facings and bloomers. Both were fabrics I already had in my stash. I was worried they'd be a little busy but think they look pretty good.

Finally, I sewed the pleats in this time round (using a narrow line of stitching at the inner edge of each pleat) and really love the result, it's so crisp and will be much easier to iron. I have no idea why I haven't done this in the past, but will certainly do it from now on. 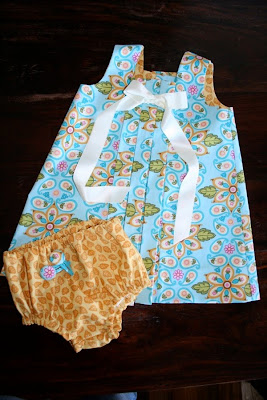 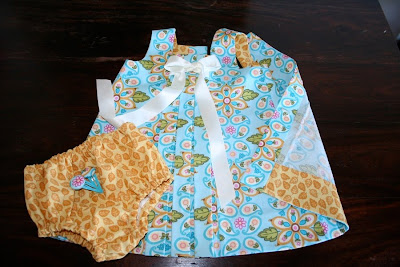 The bloomers match the dress's facings. 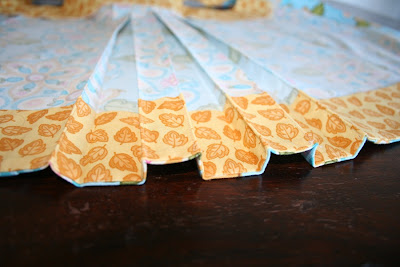 I secured the pleats with an edgestitch on the inside of each pleat. Really love the crisp finish. 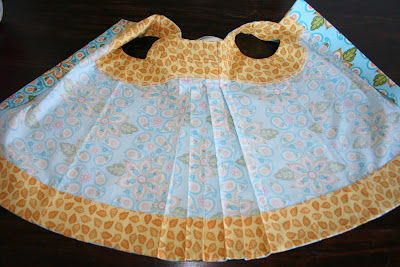 The inside of the dress. My overlocker may gather dust now that I have discovered the beauty of French seams. It makes the dress look so neat and professional.